Rum & Raisin Cheesecake – A delicious no-bake cheesecake inspired by the classic ice cream flavour. Packed full of rum-soaked raisins and with a hint of black treacle.

It’s a delicious no-bake cheesecake, packed full of rum-soaked raisins and flavoured with black treacle, just like the classic ice cream. It’s then topped with swirls of whipped cream.

Why are the raisins soaked overnight?

In order to pack this cheesecake full of flavour, I’ve ensured that I’ve added plenty of rum (120ml). However, this amount of rum cannot simply be added into the cheesecake mixture as it’ll end up too runny and the cheesecake won’t set.

The solution to this is to soak the raisins in the rum allowing them to absorb the rum, becoming plump and juicy. The rum is then contained within the raisins meaning your cheesecake mixture remains stiff to set properly.

It takes time for the raisins to absorb the rum so I find that it’s best to leave them overnight.

You can soak them for less time, but you’ll find that the final cheesecake will have less of a kick of rum to it.

Can I use flame raisins instead of regular raisins?

I’ve tested this cheesecake recipe with both regular and flame raisins and I personally prefer it made with regular raisins.

Flame raisins are already plumper and juicier than regular raisins and I find that the sweetness of these raisins overpowers the rum, so less rum flavour comes through in the final cheesecake.

Should this cheesecake be made with dark or white rum?

You can use either.

Can this cheesecake be frozen?

This cheesecake freezes well without the whipped cream topping. Defrost the cheesecake in the fridge before serving.

If you’re a fan of rum and raisin then you should take a look at these other recipes:

If you’re in need of more delicious cheesecake recipes then take a look at my Cheesecake Index.

Due to the addition of the alcohol, this cheesecake mixture is quite soft. It should firm up enough in the fridge, but if you find it’s a little soft to remove from the tin pop it into the freezer for half an hour to firm up before removing it from the tin.

Once it has been removed from the tin, allow it to come up to room temperature for 10ish minutes, so it’s not too cold.

If the edges of the cheesecake look a bit smudged after removing it from the tin, run a palette knife around the edge to neaten it.

The ingredients I used to make this recipe are all free from the following allergens. However, please check any labels carefully for allergens you need to avoid as brands can vary and product recipes can change over time. 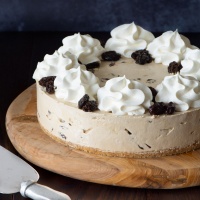