These vegan vanilla cupcakes are easy to make and taste delicious. No one would guess that they’re egg and dairy-free. 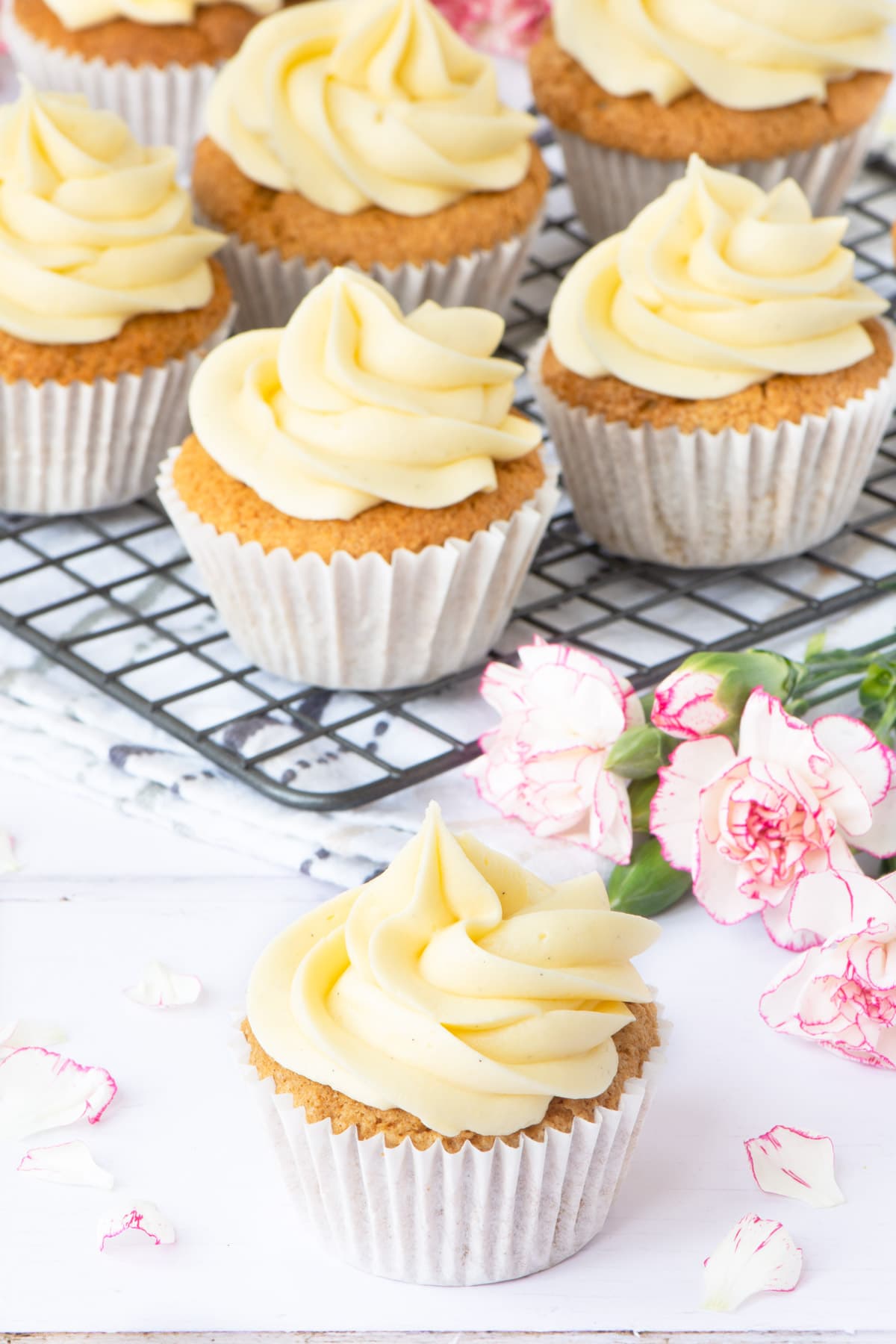 A while ago I shared my recipe for vegan vanilla cupcakes. This was my first attempt at vegan cake baking and whilst they were nice, I’ve experimented a lot since then and realised they could be made even better. Rather than leaving you with a recipe I thought could be improved upon, I’ve replaced it with this even fluffier, even lighter and even more delicious version (which is just as easy to make).

Now I’ve cracked the cupcake recipe, my next vegan cake mission is to adapt this recipe to make a larger birthday cake (the main reason I made a start on vegan baking was due to receiving several egg-free birthday cake recipe requests). I now feel pretty confident that with a little bit of trial-and-error I could convert any of my existing cake recipes to be egg and dairy-free. If there’s any you’d particularly like the recipe for, then do let me know in the comments. 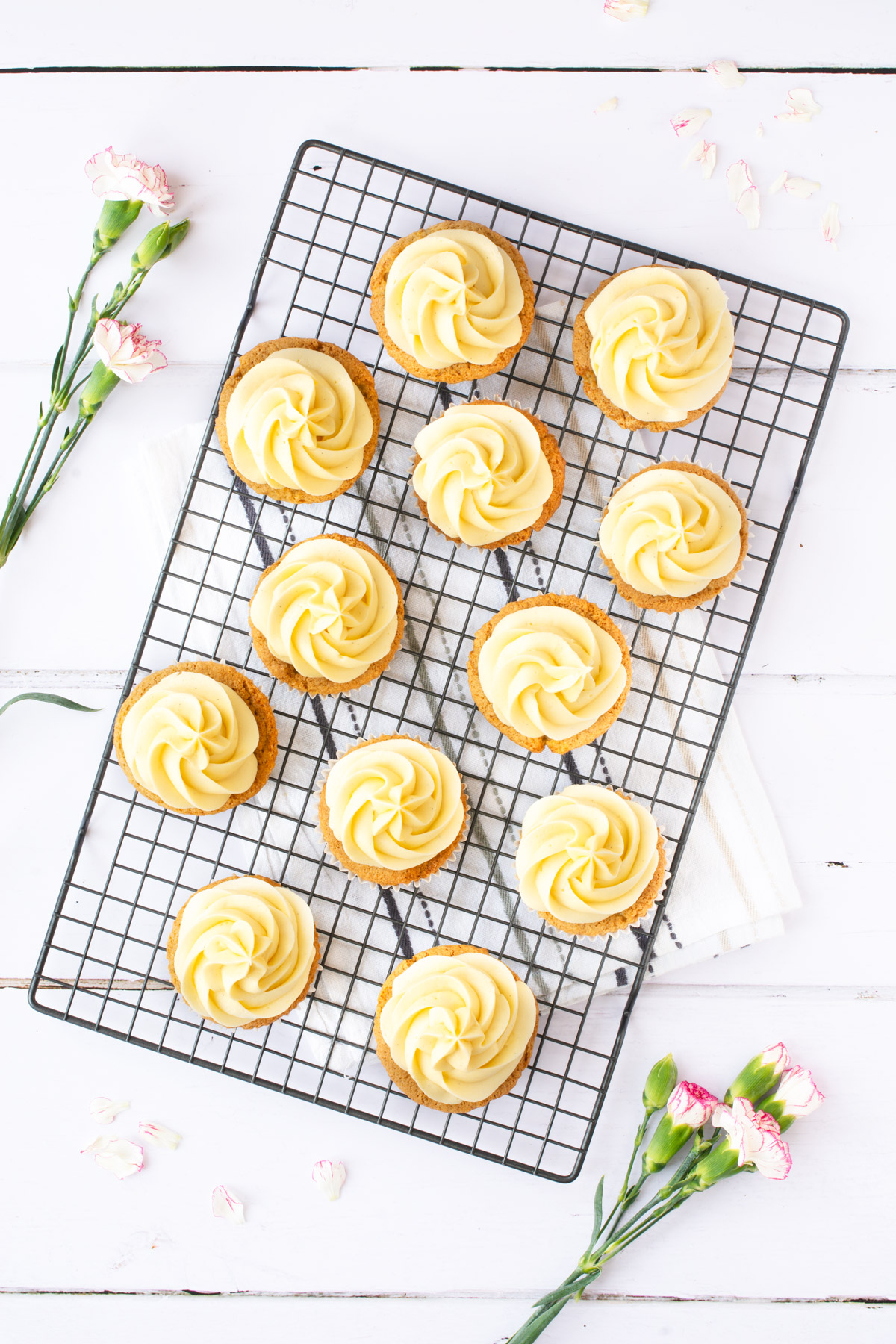 What’s The Secret To A Delicious Vegan Cake?

To perfect my vegan cupcakes I tried many of the vegan recipes I found online. I noticed that many opted for just one egg replacer (the dairy is easy to replace). They either used…

When I tested these I found that cakes made with vinegar and bicarbonate of soda rose well and had fantastic structure, but they were a little claggy as there was too much moisture. Whereas the chia cakes were less claggy, but they lacked structure and so were very fragile.The solution – combine them.

Combining different egg replacers makes sense as eggs do many different jobs when used in baking (take a look at my recent post about the role of eggs in baking for more information). They…

Expecting just one egg replacer to be able to do all of these jobs is a bit optimistic so it’s no surprise that using a combination of two gives a better result. 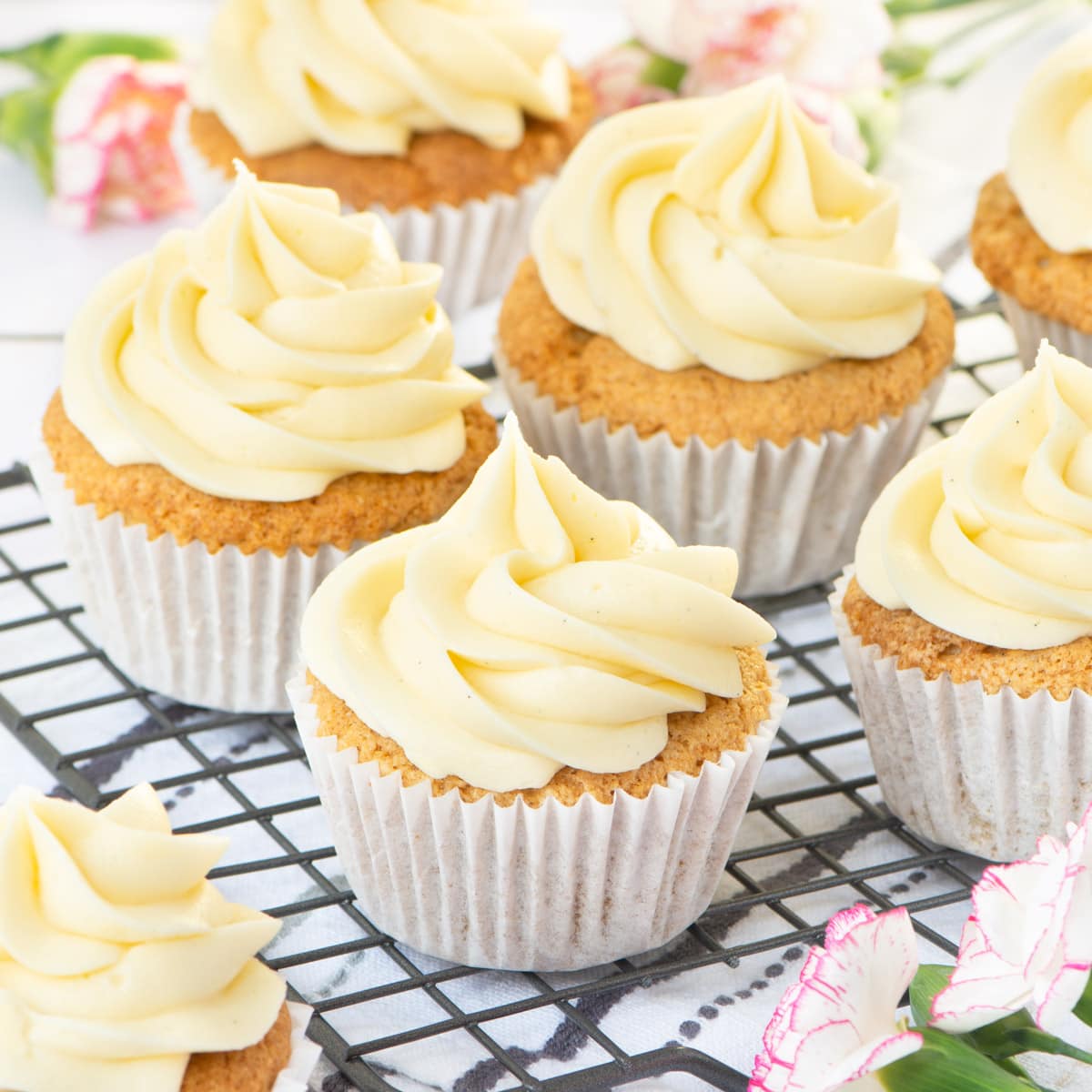 In my vegan cakes, I use a combination of cider (or white wine) vinegar and bicarbonate of soda to provide lift and structure, and chia seeds to absorb the moisture from the other ingredients and add softness to the sponge. The result is a deliciously light sponge that you’d never guess was egg-free.

However, it’s not just about the egg replacement. I made plenty of other small tweaks to get these cakes just right…

Getting the level of ingredients just right was definitely a balancing act. Cakes made with oil, almond milk, bicarbonate of soda and vinegar rose well and were robust, but the addition of more margarine, less almond milk and chia gave a better texture. Going down the route of a little more margarine and a little less milk means these cakes do crack a little on the top but I think this is a small price to pay for a more delicious cake (especially as it can be covered in buttercream so no one will know). 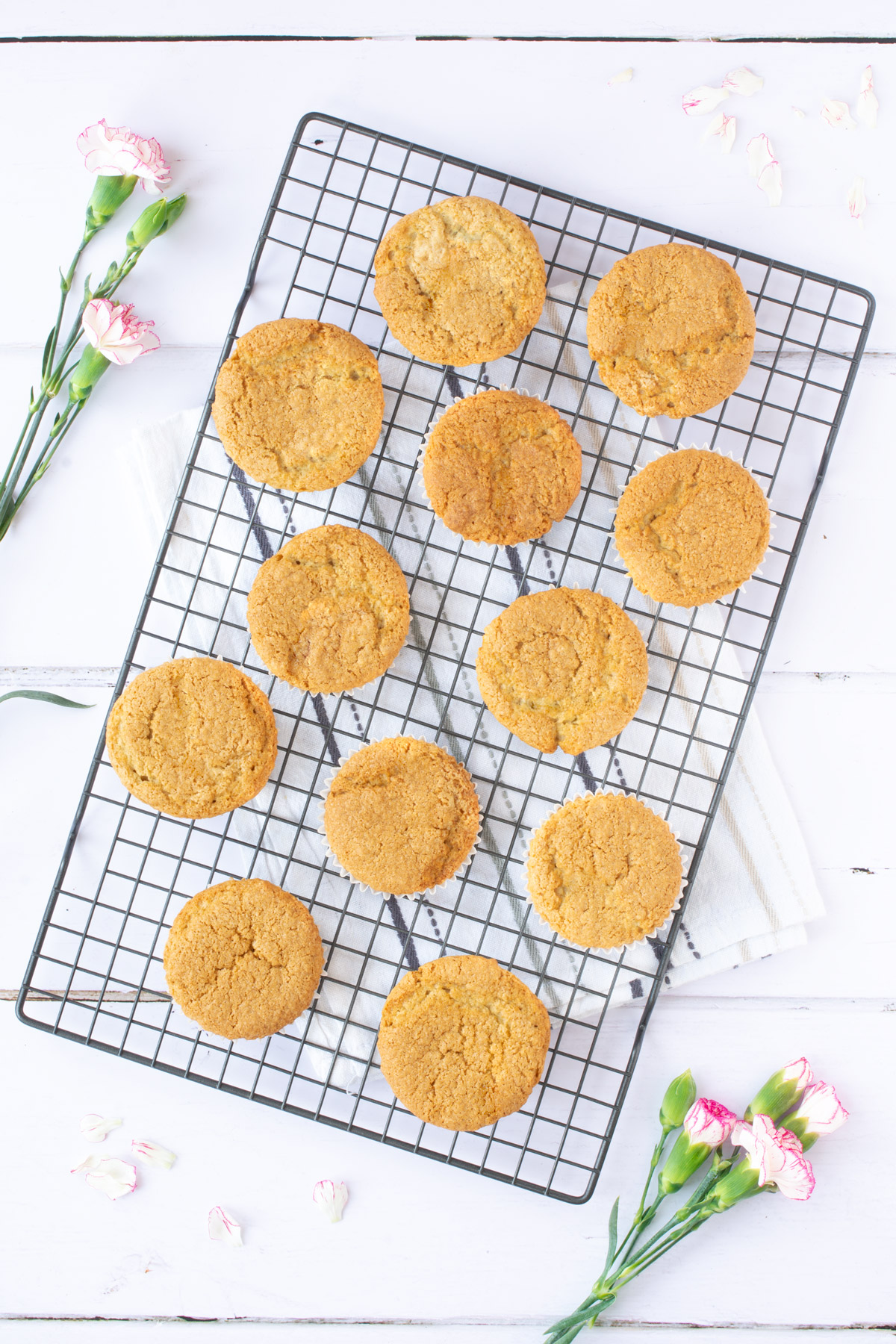 Before making this recipe for the first time, please read through my extra tips for success… 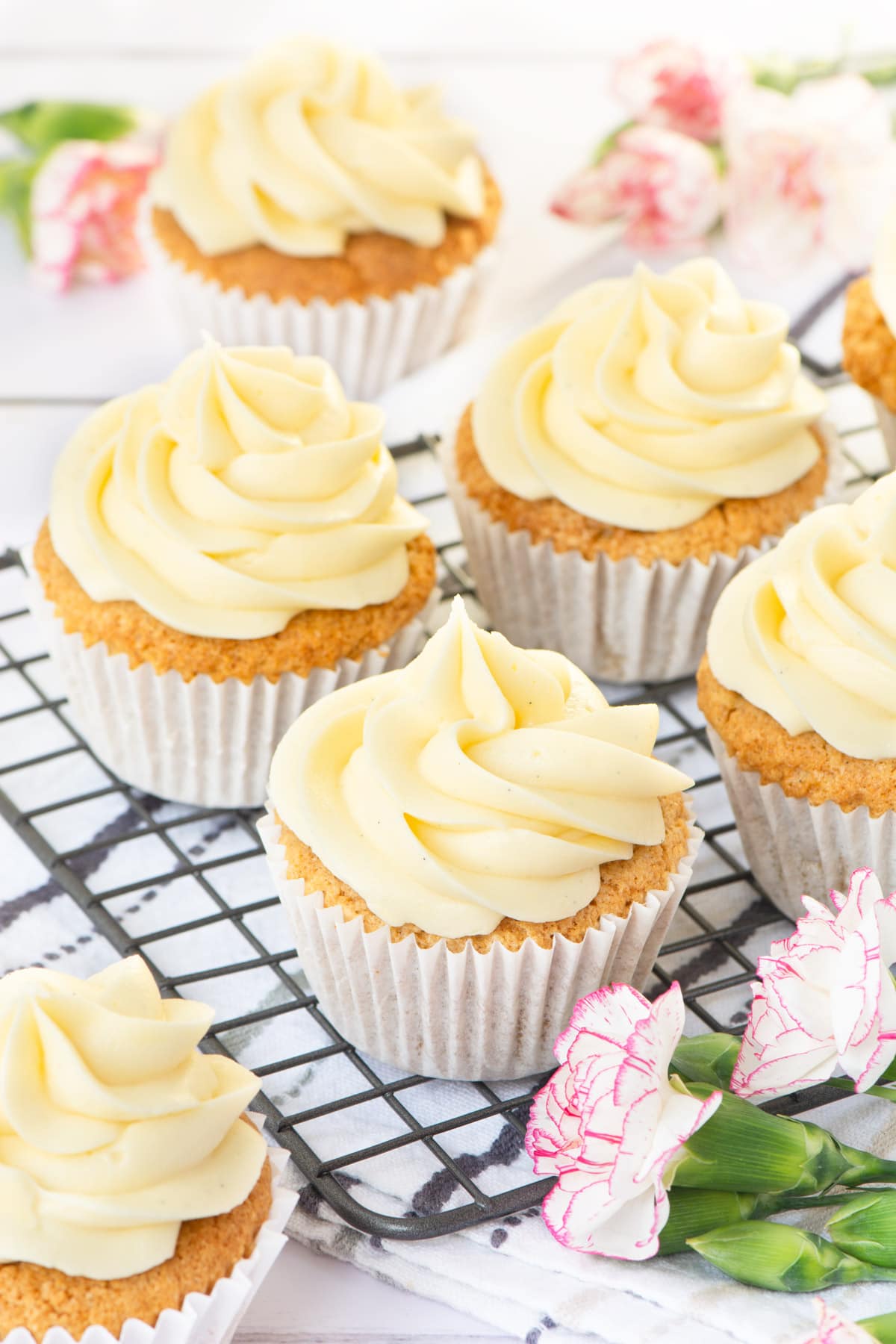 Before you start, make sure you have all of the equipment needed.

NOTE – These are affiliate links which means that if you purchase from Amazon after clicking on one the product links below I may earn a small commission. All of the products linked are ones I use in my kitchen.

These cupcakes are baked in the oven.

A few extra notes about the recommended equipment

Weighing Scales – I have included conversions to US cups/ounces within the recipe. However, for best results, I’d recommend weighing your ingredients as it’s more accurate. For more information about how the cups conversions have been calculated take a look at my grams to cups calculator.

Measuring Spoons – When baking you should use proper measuring spoons rather than the ones you’ve got in your kitchen drawer for eating and making a cup of tea as they’re much more accurate.

Mixer – I love my Kitchen Aid mixer (it’s red and looks all pretty out on my worktop 🙂 ). You can also use a hand mixer and bowl, or simply a bowl and wooden spoon.

Spice Grinder – A spice grinder is needed to finely grind the chia seeds. You can also use a pestle and mortar but you will get your chia seeds more finely ground by using an electric grinder.

If you don’t have a spice grinder or pestle and mortar then don’t worry. You can leave the chia seeds out and still get good cupcakes. However, including them will give your cakes a better texture and make them that bit more delicious.

Cake Skewer – To test whether your cupcakes are ready. You can also use a barbecue skewer or a knife if you don’t have a cake skewer. If you choose to use a knife be warned that it’ll leave quite a large mark in the middle of your cake (although this can easily be covered with buttercream).

Cupcake Scoop – I like to use a cupcake scoop to fill my cupcake cases. I’ve not listed this in the list of equipment needed as you’re absolutely fine just scooping the mixture into the cupcake cases with a spoon, but I prefer to use one as I find it less messy and easier to evenly split the mixture 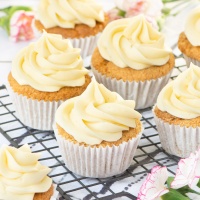 These vegan vanilla cupcakes are easy to make and taste delicious. No one would guess that they’re egg and dairy-free.
4.86 from 7 votes
Print Pin Rate Save Go to Collections
Active Time: 15 minutes
Cook Time: 20 minutes
Total Time: 35 minutes
Servings: 14 cupcakes
Prevent your screen from going dark

See the notes just above the recipe for a list of equipment needed to make these cupcakes. These cupcakes are topped with my VEGAN VANILLA BUTTERCREAM.
WANT TO HEAR ABOUT NEW RECIPES FIRST?SUBSCRIBE to the Charlotte's Lively Kitchen Mailing List

The ingredients I used to make this recipe are all free from the following allergens. However, please check any labels carefully for allergens you need to avoid as brands can vary, and product recipes can change over time.

If you’d like to make these cupcakes nut-free then switch the almond milk for another suitable plant-based milk.

If you need these cupcakes to be egg-free but don’t mind about dairy, then you can use regular butter or margarine instead of the vegan margarine listed and cows milk in place of the almond milk.

Pin This Recipe For Later 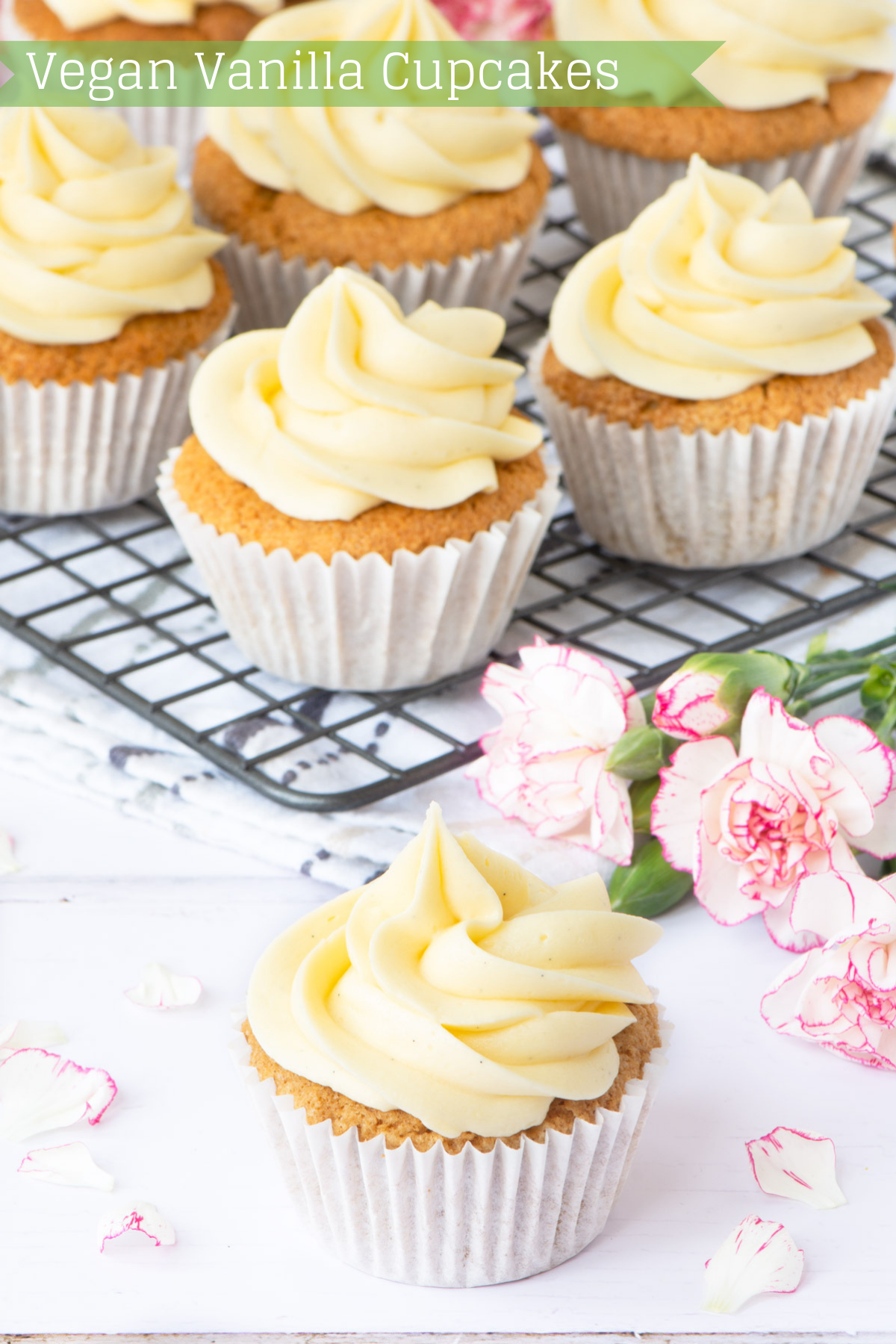