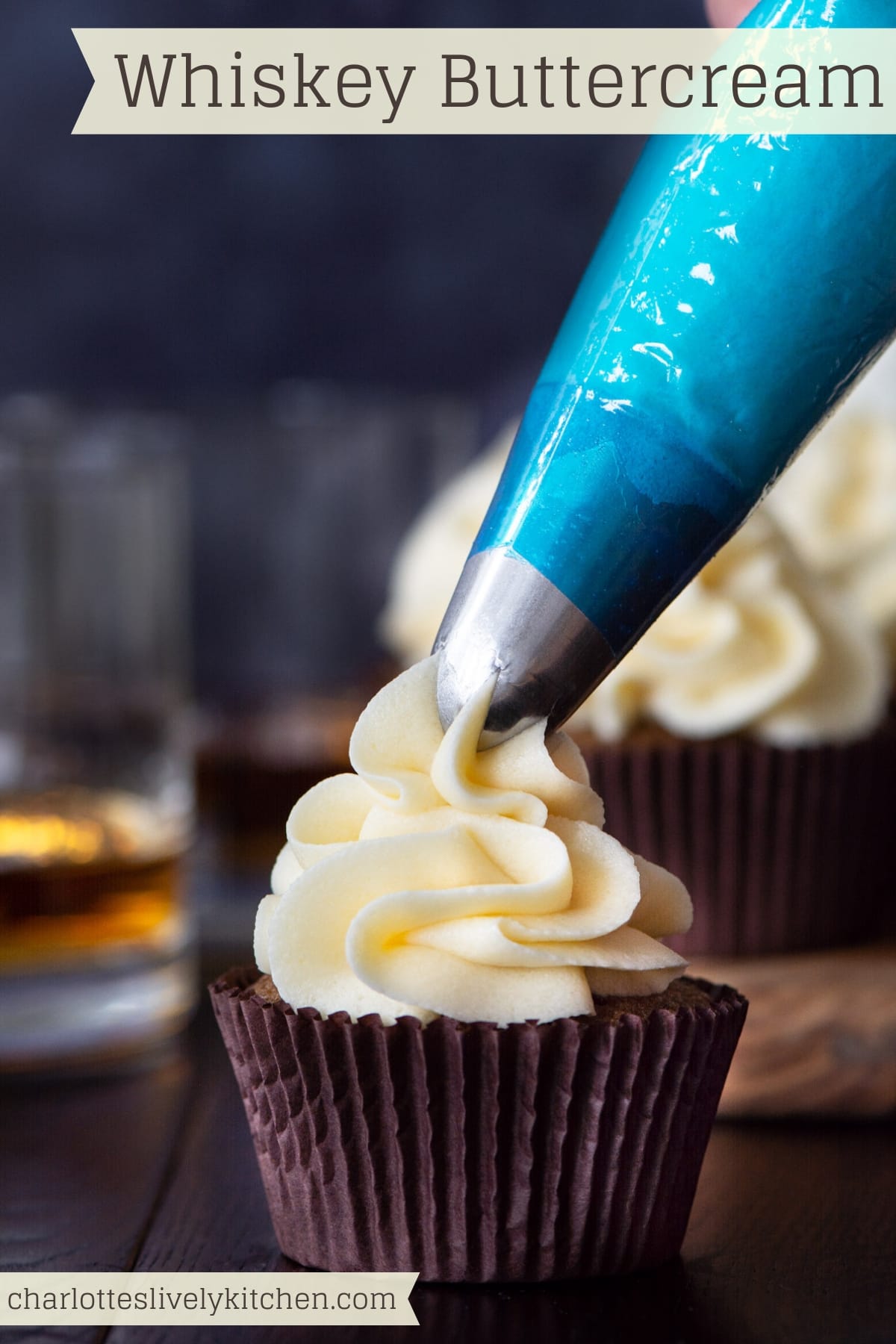 I now have a new favourite flavour of buttercream – Whiskey buttercream. It truly is absolutely delicious.

I hadn’t originally planned on making a Whiskey buttercream. I had the idea in my head to create a new alcoholic buttercream flavour (as you all seem to like my Baileys and Brandy versions). Given the popularity at the moment of both gin and rum, these were the obvious choices for my new flavour, but seeing as I was recipe testing, I raided my drinks cupboard and tested a few others too.

Sadly the gin and rum buttercreams didn’t work out as I’d have liked. Despite adding A LOT of alcohol to both, the gin and rum got a bit lost in the sweetness of the buttercream, I needed something with a more powerful flavour. Enter Whiskey.

I’m not really a huge fan of Whiskey as a drink, I find it a bit too bitter on its own – I’m definitely more of a Baileys girl. However, it tastes simply amazing as a buttercream as the powerful flavour of the Whiskey goes perfectly with the sweetness of the buttercream. That buttercream is then perfect on some coffee cupcakes to make a kind of Irish coffee cake like the ones in these pictures. It also tastes great with vanilla, chocolate or caramel cake too.

If you really like the sound of gin and rum buttercream, fear not, I’ll keep working on them and I’ll share the recipe as soon as it’s ready. 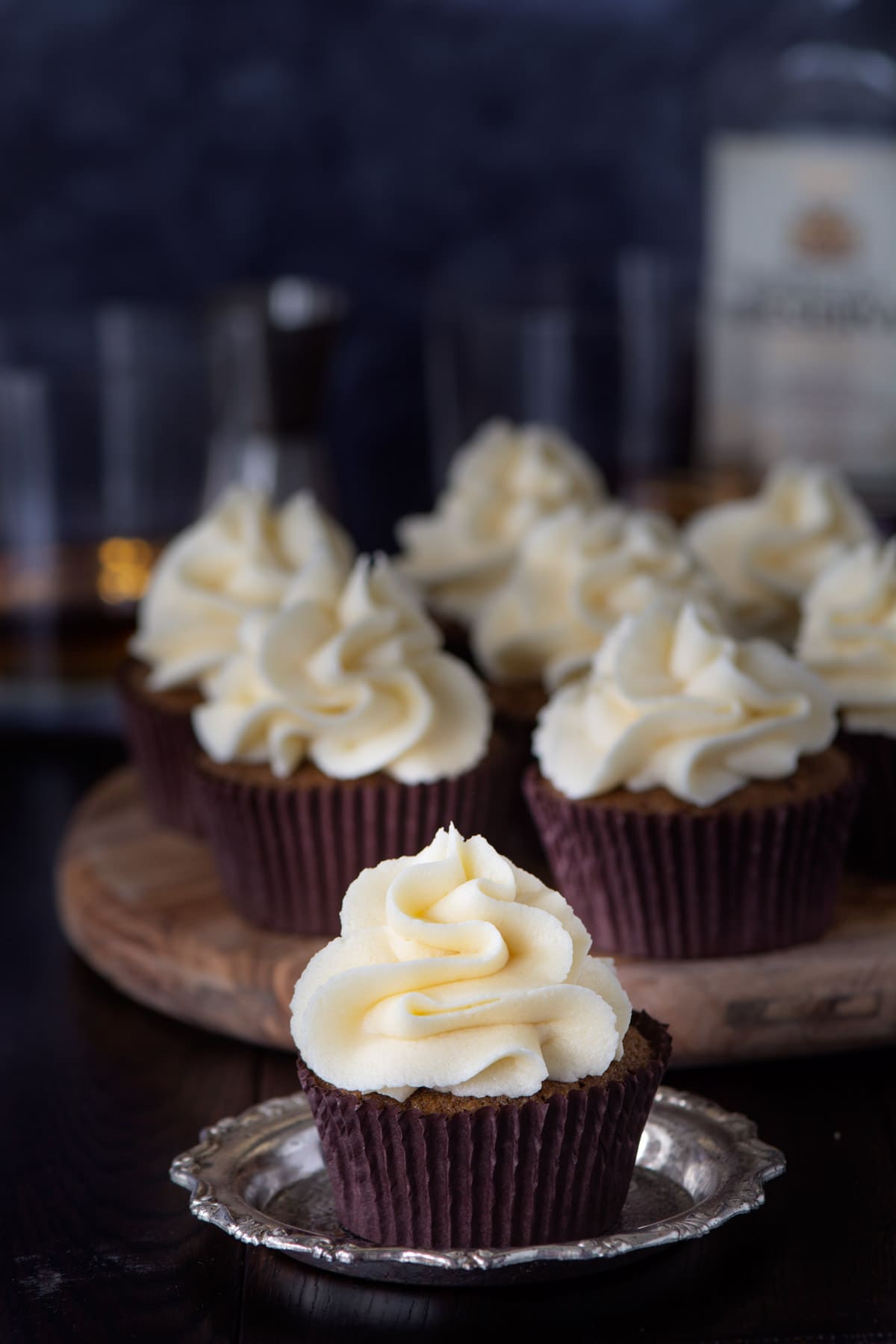 I was in two minds whether to go for Whiskey or Whisky when I named this recipe. In the end, I deferred to the knowledge of my Insta followers and did a poll in my stories. Whiskey with an e was the clear winner.

In reality, it doesn’t matter which you buy; the recipe works equally as well with any. You can also use Bourbon if you prefer. However, there was no way I could call it Bourbon Buttercream as if I saw that written down I’d always assume it was flavoured with the classic British chocolate biscuit (which while I’m thinking about it, would make a brilliant flavour – I’ll have to add it to my to-make list). 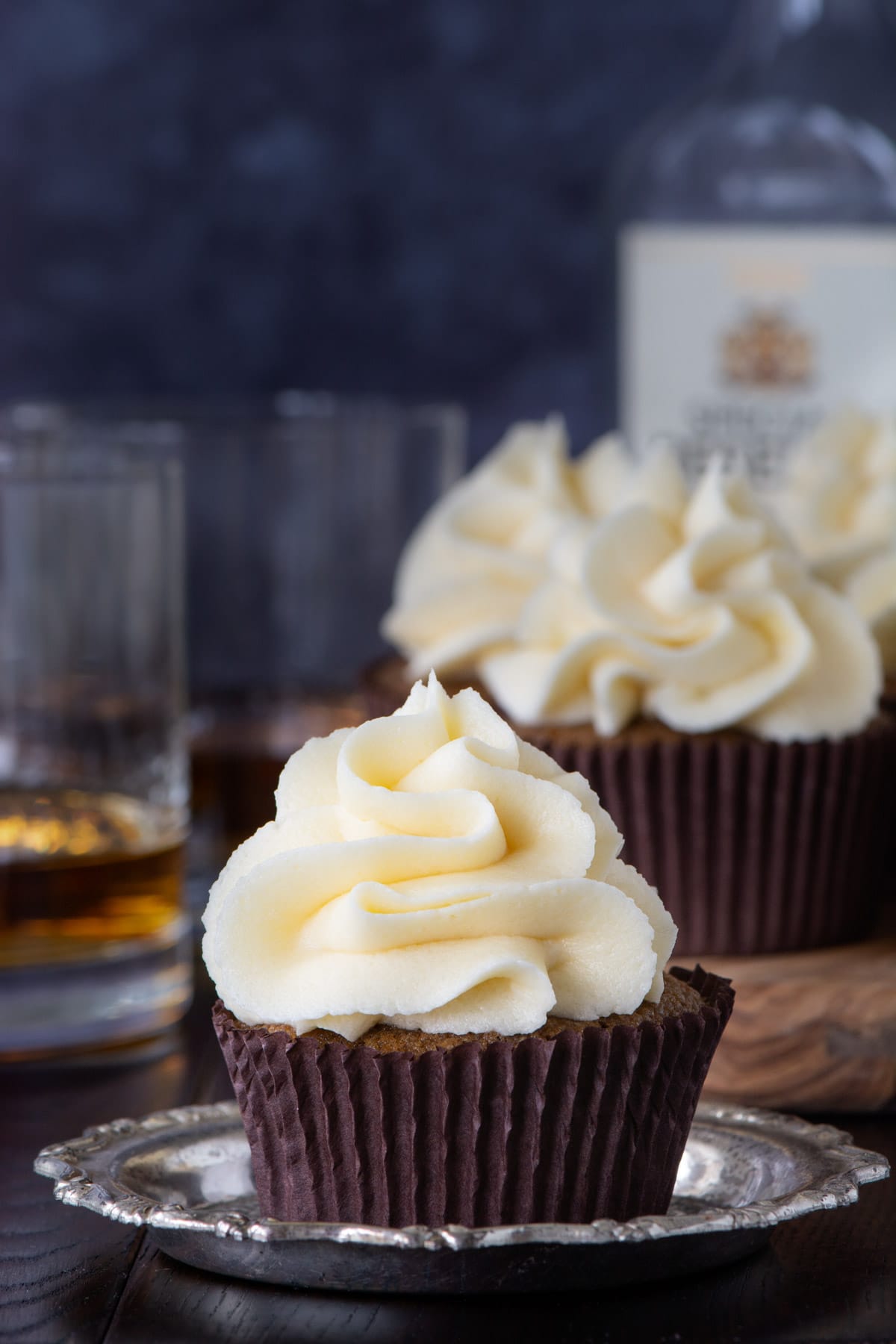 Other recipes for Whiskey lovers

If you’re a lover of all things whiskey-filled then why not try some of these other delicious recipes: 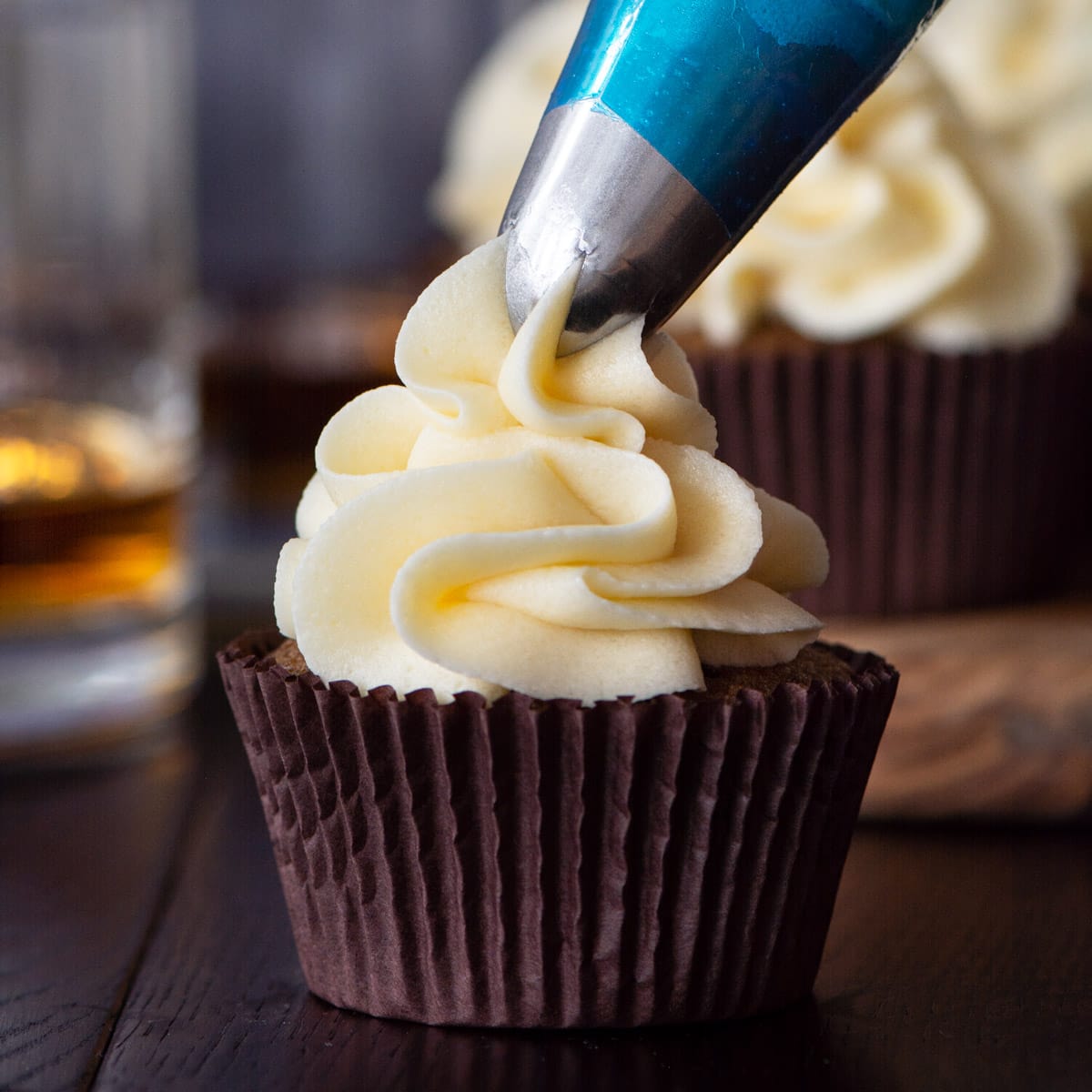 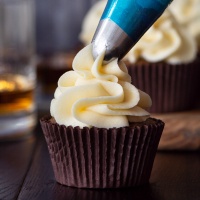 This recipe makes enough buttercream to decorate 12 cupcakes as shown in the picture. These cupcakes were decorated using a JEM1B nozzle. It also makes enough to fill and top my coffee cake.
WANT TO HEAR ABOUT NEW RECIPES FIRST?SUBSCRIBE to the Charlotte's Lively Kitchen Mailing List

The ingredients I used to make this recipe are all free from the following allergens. However, please check any labels carefully for allergens you need to avoid as brands can vary, and product recipes can change over time.

Some brands of Whiskey can contain allergens due to their particular manufacturing process so please check your chosen brand carefully. 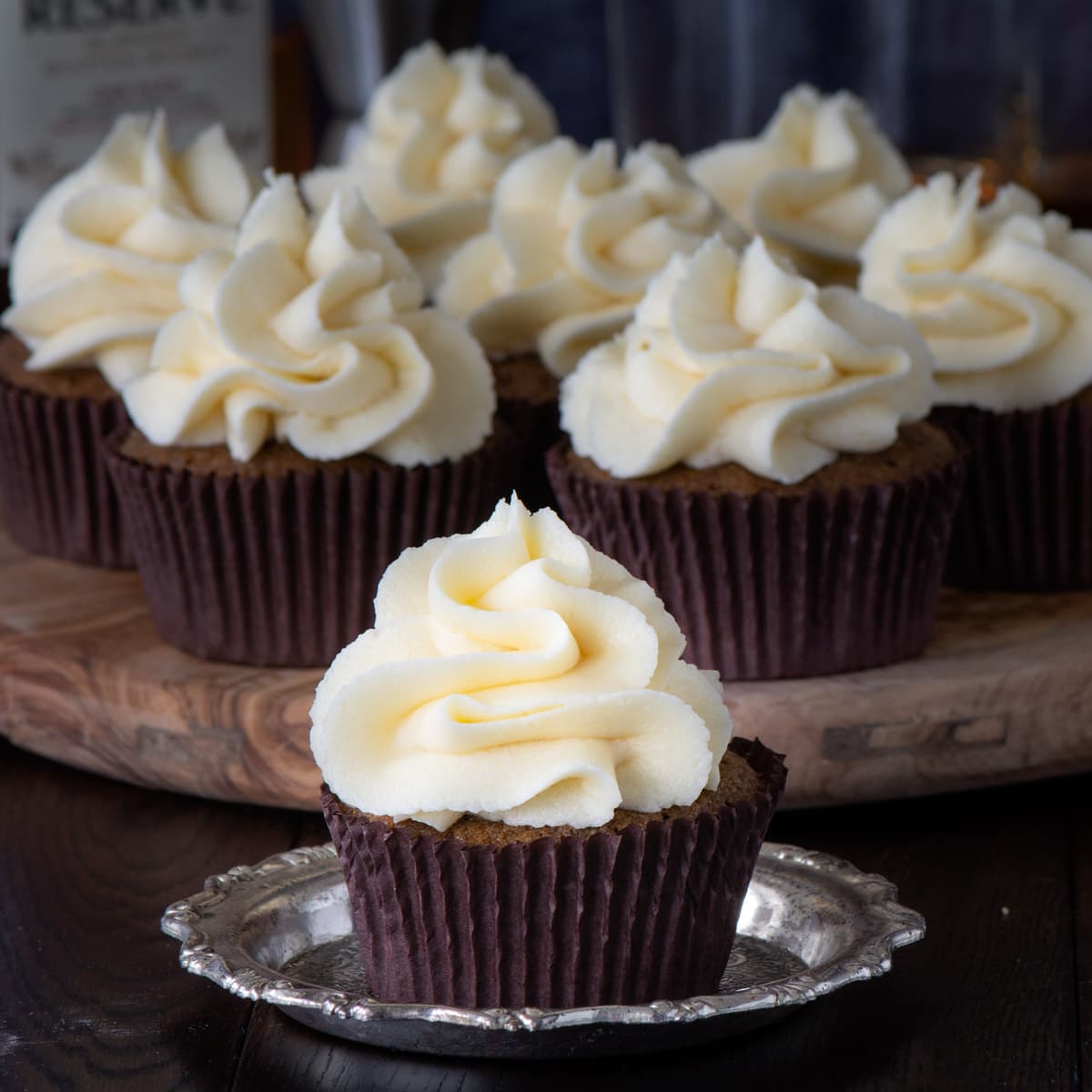 In order to create a Whiskey buttercream that’s packed full of flavour, you have to add a decent amount of Whiskey. Unfortunately, butter isn’t a big fan of liquid so if you’re not careful your buttercream can start to split as you add more.

The solution to this is very simple – to add the Whiskey very slowly (no more than a teaspoon at a time). By adding the Whiskey slowly, you can make sure each addition is completely beaten in before adding more, and you’ll find the buttercream can incorporate a surprising amount of liquid.

However, you may have a moment where you accidentally add a little more than intended in one go, and your buttercream starts to look a bit grainy. If this happens, don’t panic as you can easily fix it. 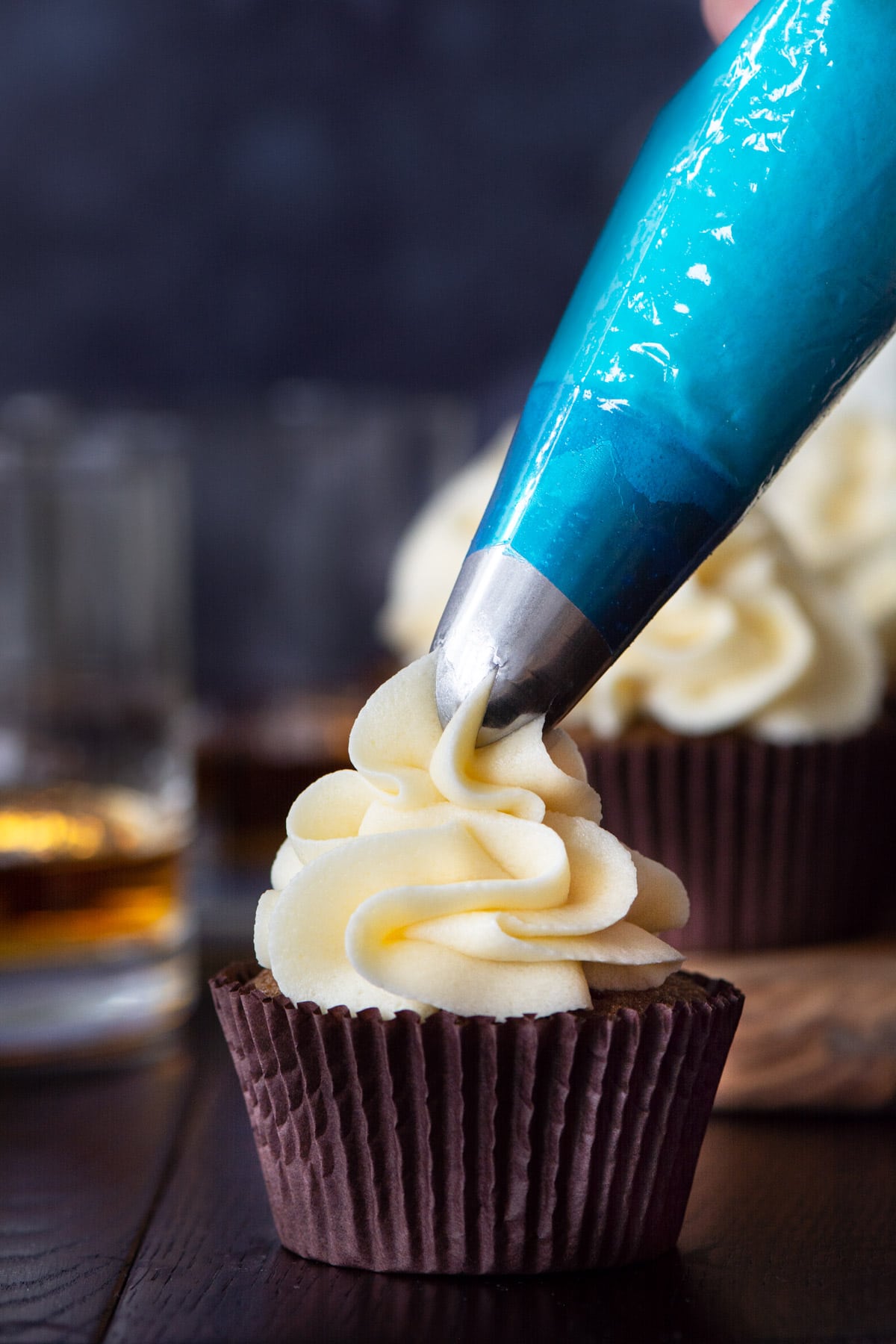