Apple crumble flapjacks – Golden flapjacks with a layer of juicy apple and raisins. Perfect on their own as a snack or smothered in hot homemade custard for a warming dessert. 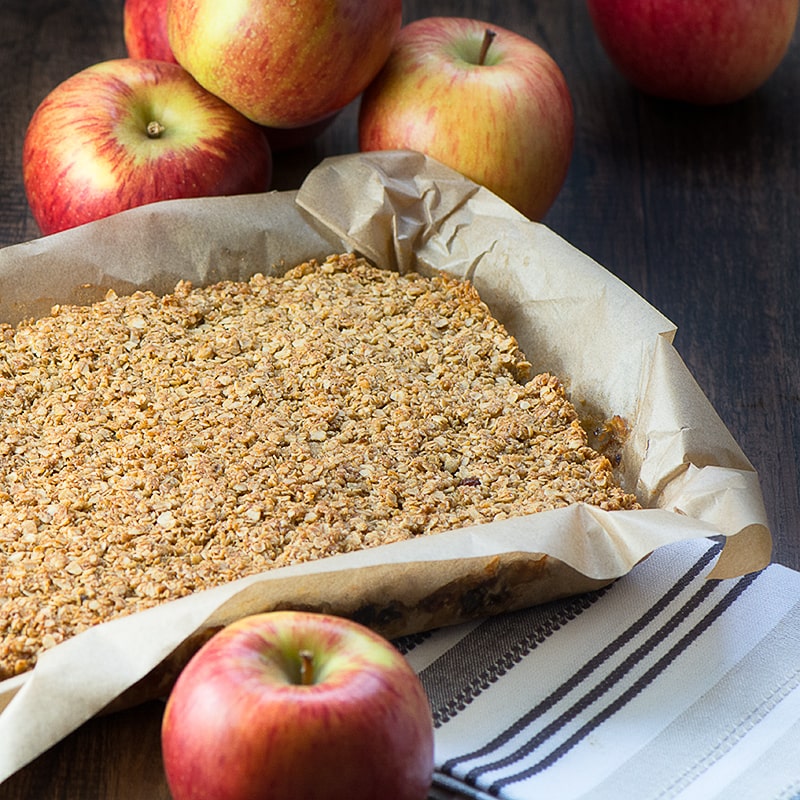 When I first started Charlotte’s Lively Kitchen it was very much my project. Something I worked on when my husband (he’s called Jon by the way) was at work, and the boys were busy doing other things.

However over Christmas, during his holidays, Jon started showing a bit more interest. Then a couple of weeks ago he announced the he wanted to have a go a creating a new recipe – apple crumble flapjacks. 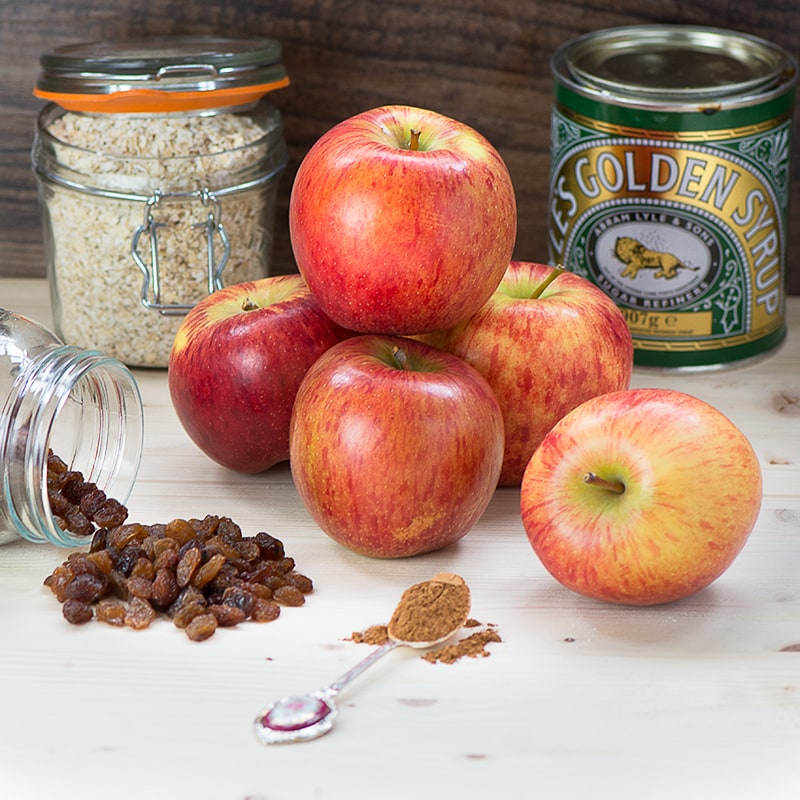 This flapjack recipe started life as a simple apple flapjack. However, the crunchy oats, cinnamon and layer of apple reminded me so much of an apple crumble (especially when I covered them in homemade custard) that I decided to rename them. 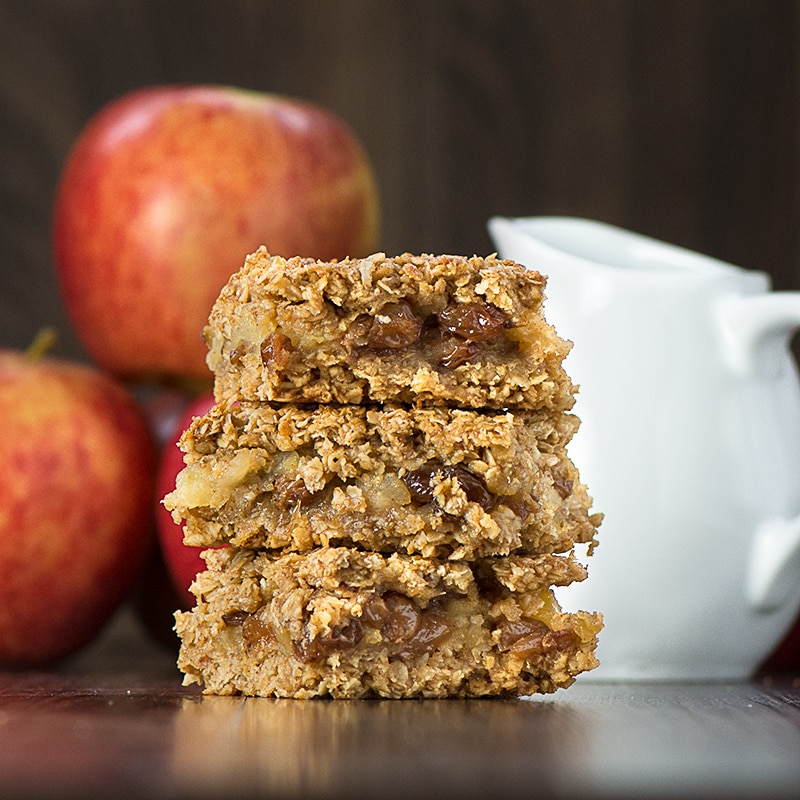 One major advantage of these flapjacks is that they don’t contain any flour. I don’t have anything against flour, I use it in many of my recipes. The problem is, when Jon sifts flour he seems to think that it needs to be done with a flourish, leaving a thin layer all over the kitchen that I (as his sous chef on this occasion) am then responsible for cleaning up. There’s no sifting here, so the mess stays at a minimum. 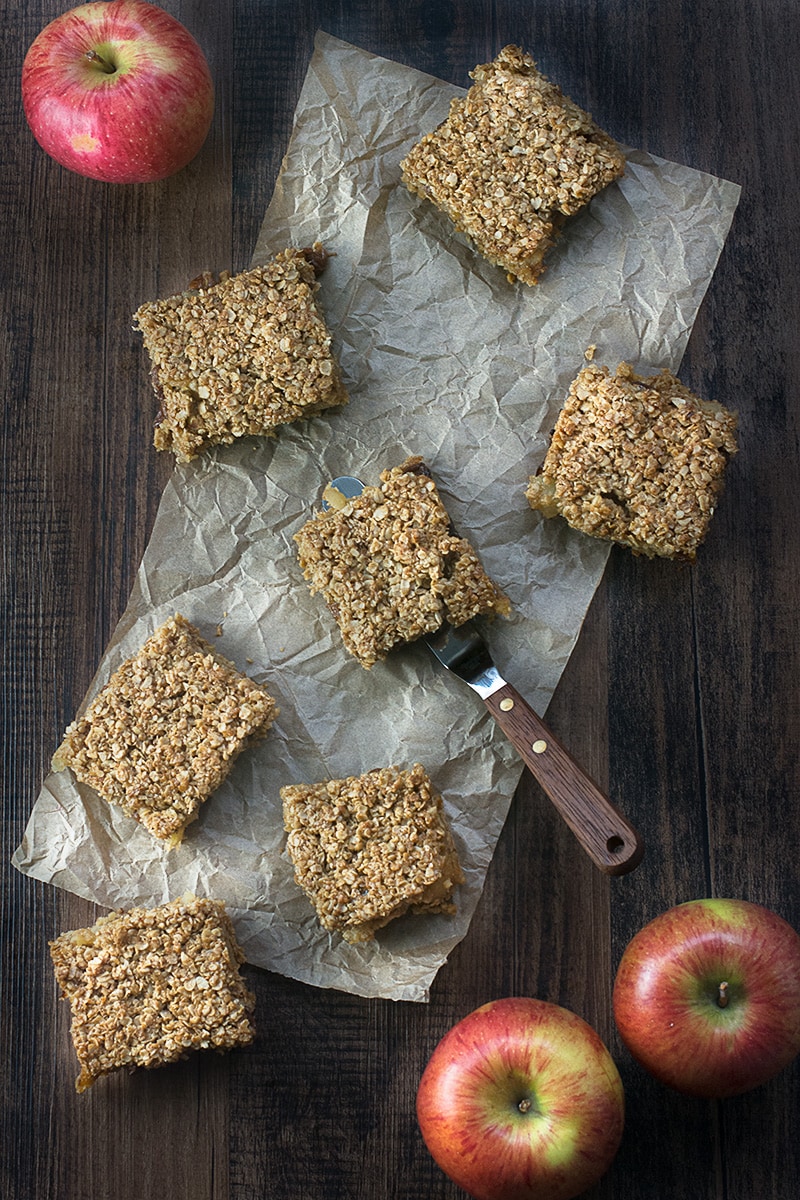 Another of my sous chef jobs is lining the baking tray (if you’ve seen his present wrapping you’d understand why!). Fortunately for this recipe all you need to do is cut a sheet of baking parchment slightly larger than the baking tray, and then when you fill the tin you simply push the mixture into the corners – simple. 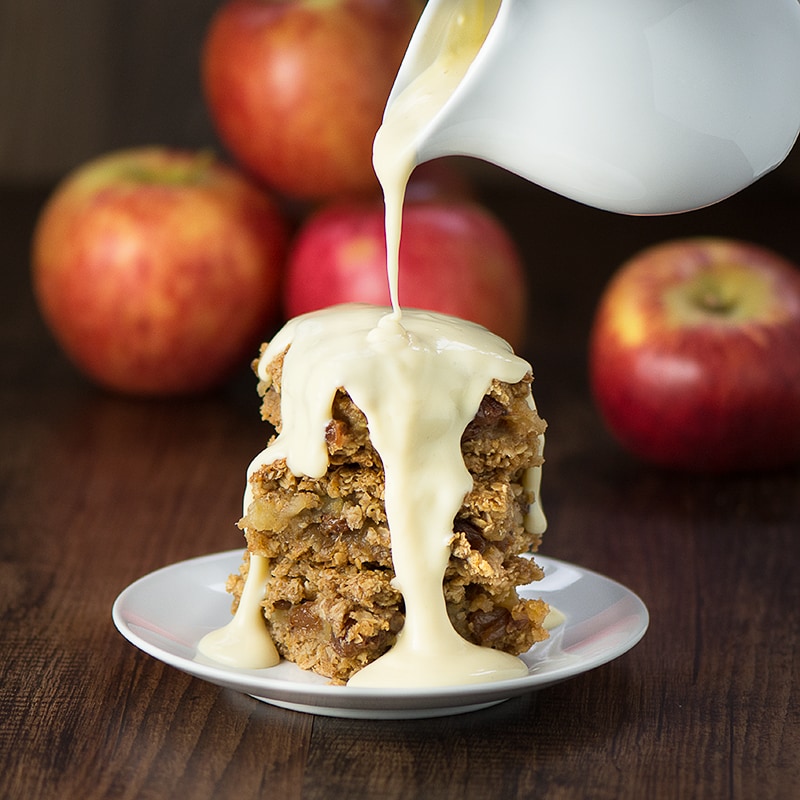 As I said before, when my husband is cooking, I’m his sous chef. However, when I’m writing, he’s my sub-editor. I’m wondering whether to hit publish before he comes home from work and tells me I can’t say these things about him (because he’s actually pretty brilliant) 🙂

What do you think?

So here it is… My husband’s fabulous apple crumble flapjack recipe! 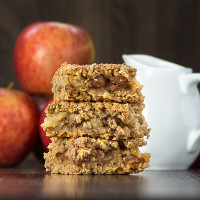 Apple crumble flapjacks – Golden flapjacks with a layer of juicy apple and raisins. Perfect on their own as a snack or smothered in hot homemade custard for a warming dessert.
4.34 from 18 votes
Print Rate Save Go to Collections
Active Time: 10 minutes
Total Time: 30 minutes
Servings: 12 large flapjacks
Prevent your screen from going dark

Have you tried this recipe? Please leave a comment and rating at the bottom of the page to let others know what you thought.
WANT TO HEAR ABOUT NEW RECIPES FIRST?SUBSCRIBE to the Charlotte's Lively Kitchen Mailing List