×
Home » Cake Decorating » The Queen’s Corgi Cupcakes (and a Giveaway!)

Celebrate the launch of The Queen’s Corgi on digital download, DVD and Blu-Ray™ with these cute Corgi Cupcakes.

Every Sunday we have a family film night at home and our pick for this weekend is The Queen’s Corgi which is released today on digital download, DVD and Blu-Ray™.

The Queen’s Corgi is the story of Rex, the Queen’s Top Dog – a spoilt little corgi who lives a life of luxury in Buckingham Palace. But when Rex winds up in a London Dog’s Home, surrounded by tough strays, he must learn that to become a true Top Dog, you have to earn it!

This is a fabulous film and if you’re looking for something to watch together on a chilly autumn evening or this half term then I’d thoroughly recommend it.

How to make The Queen’s Corgi Cupcakes

To celebrate the launch of The Queen’s Corgi on digital download, DVD and Blu-Ray™ I’ve created these cute Rex the Corgi cupcakes.

I’ve split my tutorial for making these Corgi Cupcakes into two – the instructions for making a fondant corgi and then for building the cupcakes. 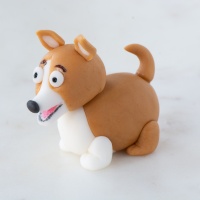 How To Make a Fondant Corgi

How to make a fondant Corgi, perfect for decorating cupcakes or birthday cakes.
4.84 from 36 votes
Print Pin Rate

Put it all together

Once you’ve made your fondant corgis it’s time to build your cupcakes. I’ve used my vanilla cupcakes and vanilla buttercream for these cupcakes. However, you can use pretty much whatever flavour of cupcakes you like. Take a look at my cupcake index for some recipe inspiration. For the I recommend using either vanilla or white chocolate buttercream as it is most easily coloured green for the grass. 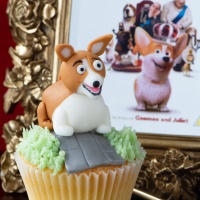 How to make Rex the Corgi cupcakes from the film The Queen's Corgi.
4.84 from 36 votes
Print Pin Rate

Can I still make these cupcakes if I don’t have fondant tools or cake decorating brushes?

You’ll find it easier using the tools recommended, but you can use a small sharp knife in place of the blade tool and the tip of you finger instead of the scoop tipped tool.

Instead of using a brush, just dip the tip of your finger into the water and gently dab it where it’s needed.

What about if I don’t have a grass piping nozzle?

If you don’t have a grass piping nozzle but still want to pipe grass then get a piping bag or plastic food bag, use a skewer to poke a few holes in the corner and you’ll achieve a similar effect to using the nozzle.

My fondant sticks to the work surface when I roll it out thinly. How can I stop this?

Simply sprinkle the worktop with a little icing sugar and that’ll stop it sticking.

Can I feed these cupcakes to my pet Corgi?

These cupcakes are not suitable to be eaten by dogs. If you’d like to make a treat for your four-legged friend the why not try these from Jane’s Patisserie instead.